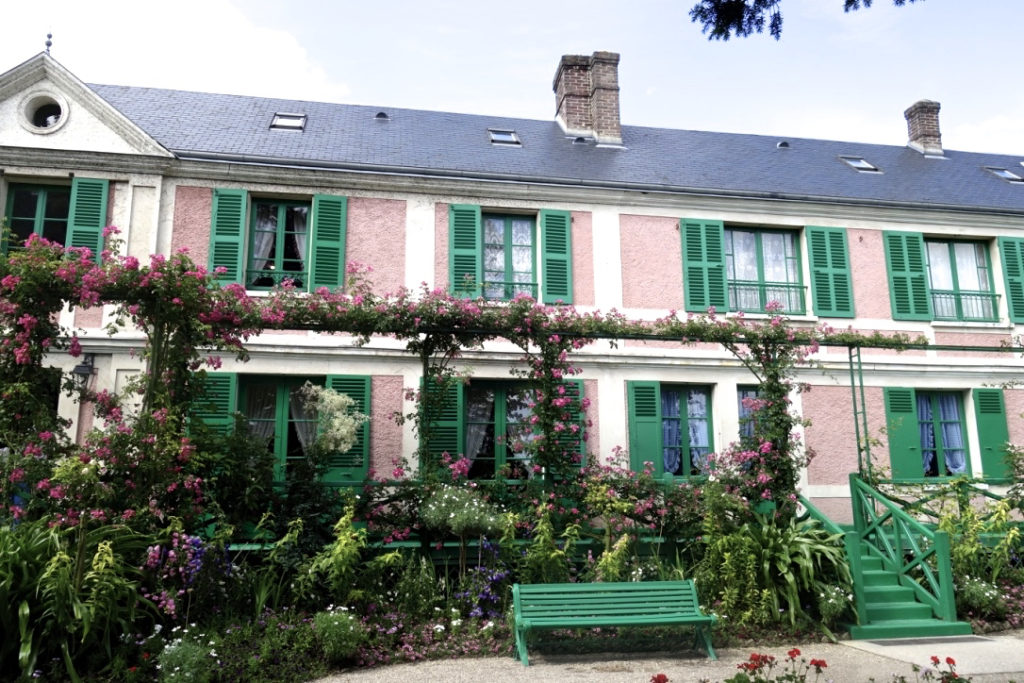 In 1890, when he was finally financially stable after years of struggle, Claude Monet purchased a house just outside the town of Vernon in Normandy, now about an hour away from Paris by train. The pink stucco house had grey shutters when he bought it, but they were soon painted a color the villagers called “Monet green.” Three years later he bought additional land to build a water garden and, much to his neighbors’ chagrin, even diverted a local river to fill his pond and support the water lilies that would flourish here.  The first lilies arrived in 1894 and Monet nurtured and added to the plants and trees that surrounded the pond and his property for the rest of his life. 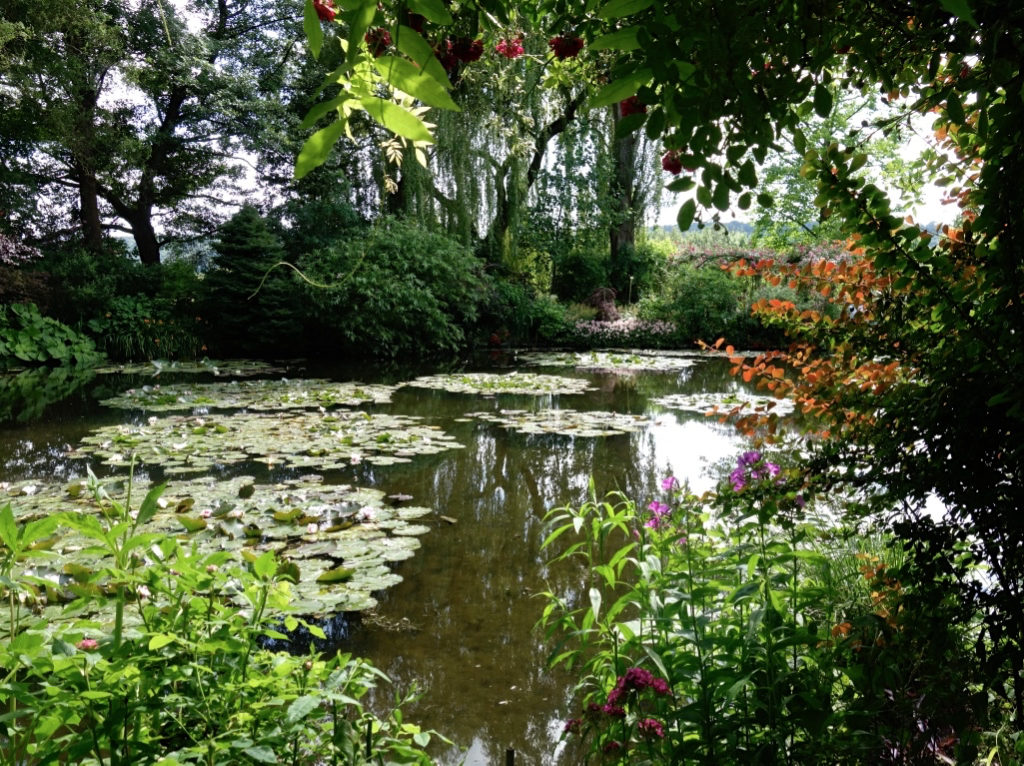 To say that Monet was obsessed by flowers is an understatement. He employed a team of 6 gardeners and spent the extraordinary sum of 40,000 francs per year on his obsession. By the end of the 19th century, Monet focused his art almost solely on his water garden and envisioned a series of canvases that would cover the walls and envelope the viewer“giving the illusion of an endless whole, of a wave with no horizon and no bank.” From 1892 until his death in 1926 Monet produced nearly 300 magical canvases on the theme of the water lily pond and the surrounding gardens. 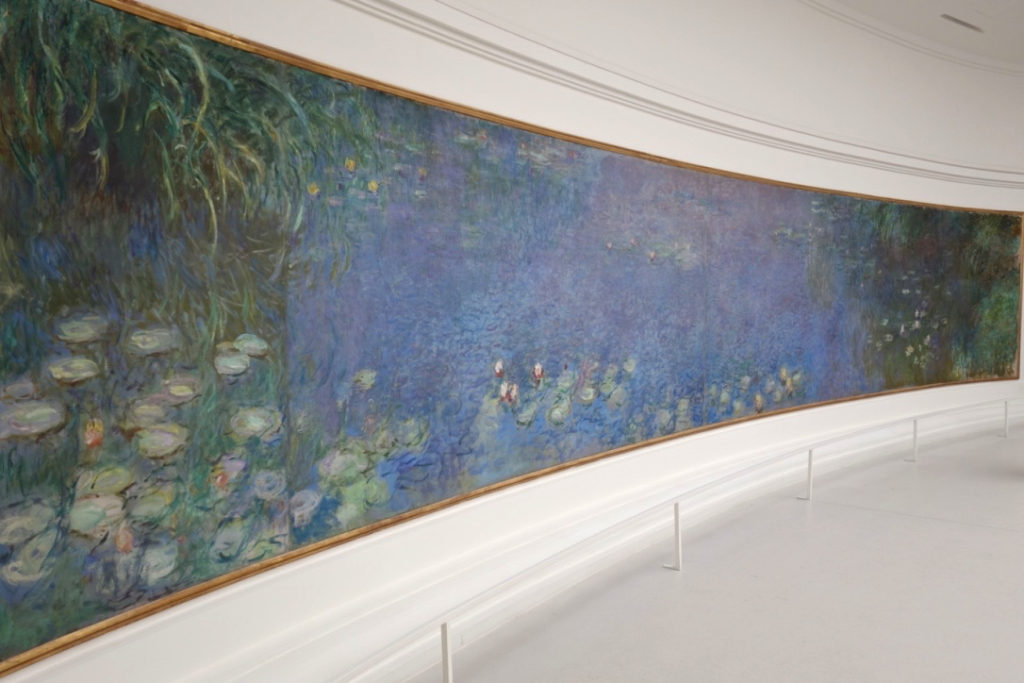 Monet’s masterpiece of the water lilies series is the 8 panels that cover two oval-shaped rooms at the Musée de l’Orangerie in Paris. Monet tried to capture not only the plants and trees that populated his garden and pond, but also the atmosphere that surrounded them and the shifting phantoms of light and color that danced around the vegetation. Visiting both the paintings and the garden that inspired them is a delight.  Monet’s house has no original paintings by the artist, only reproductions of works of art that at one time hung in his home, but you will not be disappointed with the spectacular living masterpiece of his garden and lily pond that continue to flourish today. 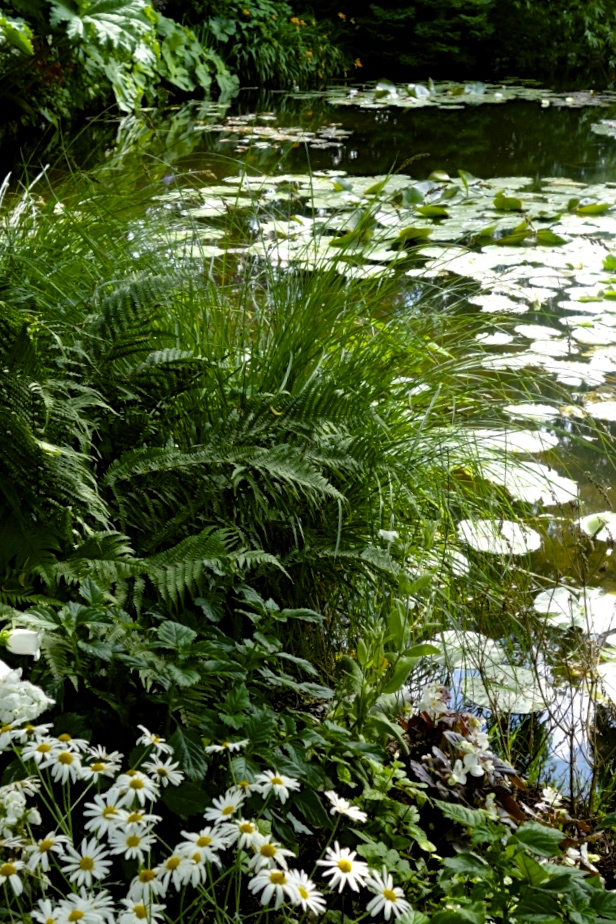 Daisies and Ferns along the edge of Monet’s Pond 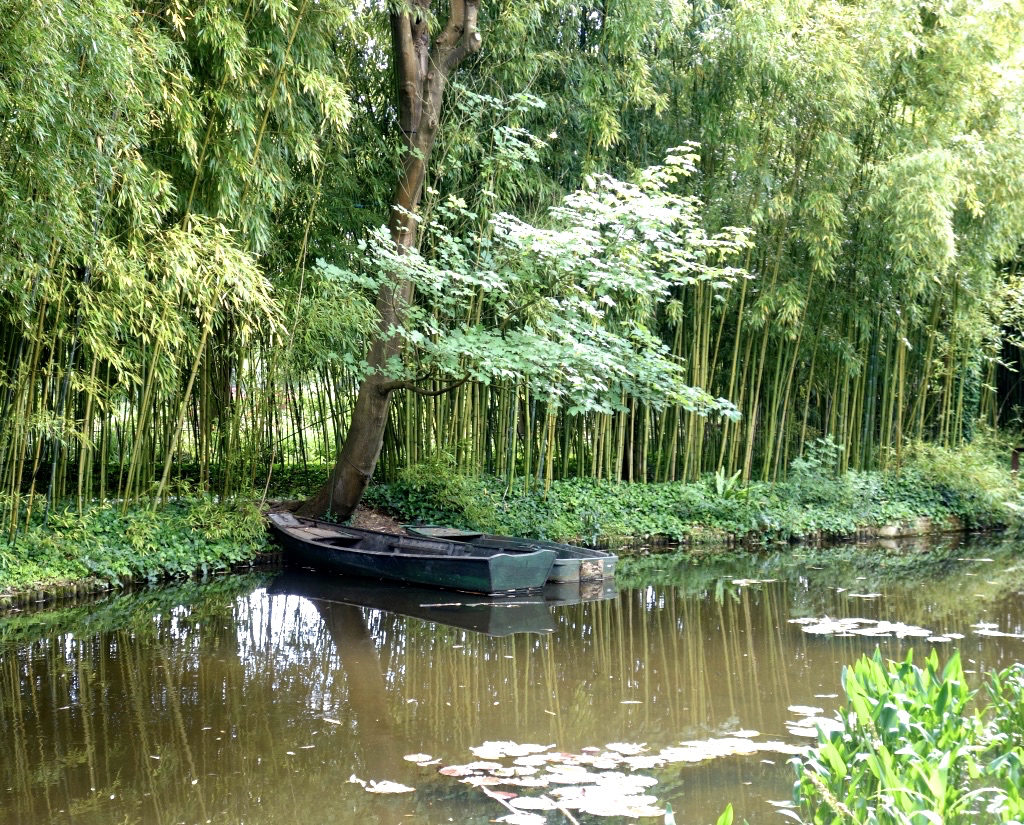 Monet’s Pond with Boats and Bamboo 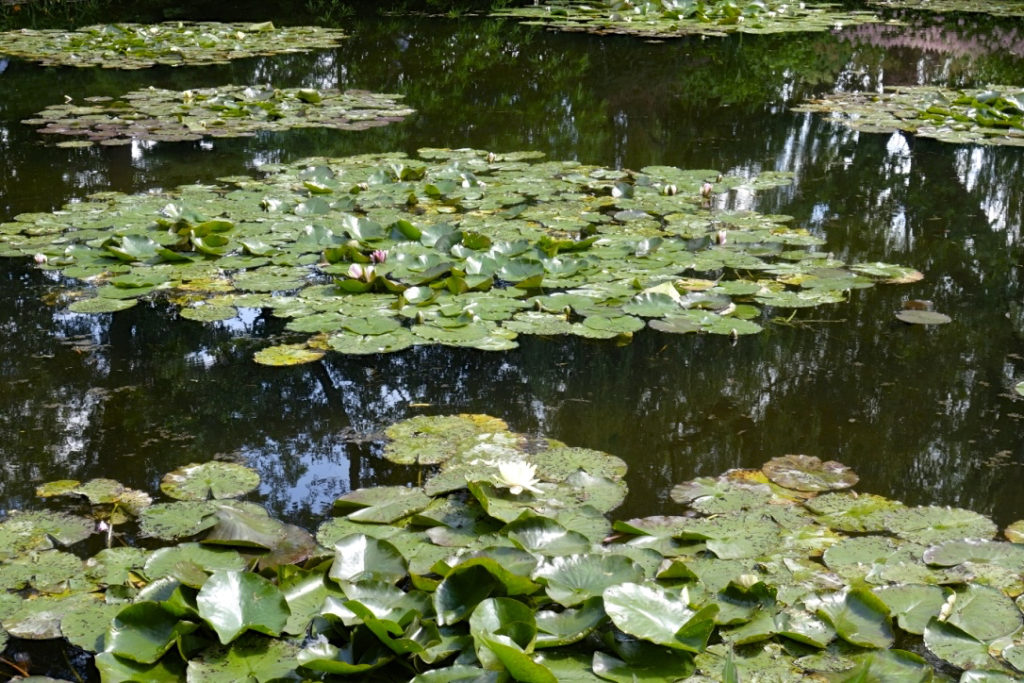 Monet planted white water lilies local to France along with important cultivars from South American and Egypt that were yellow, blue, and a white that turned pink as it aged. 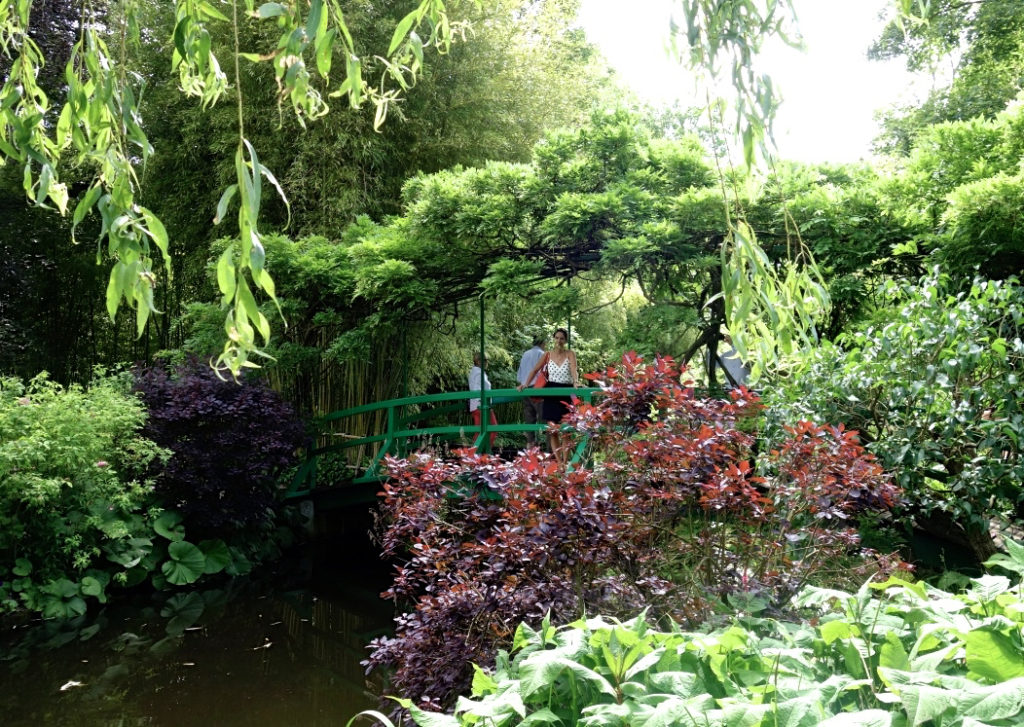 He built a Japanese bridge (and painted it “Monet green!”) for his beautiful purple wisteria. It was not blooming when I was there last June, but the study vines are evidence of what is surely an incredible sight! 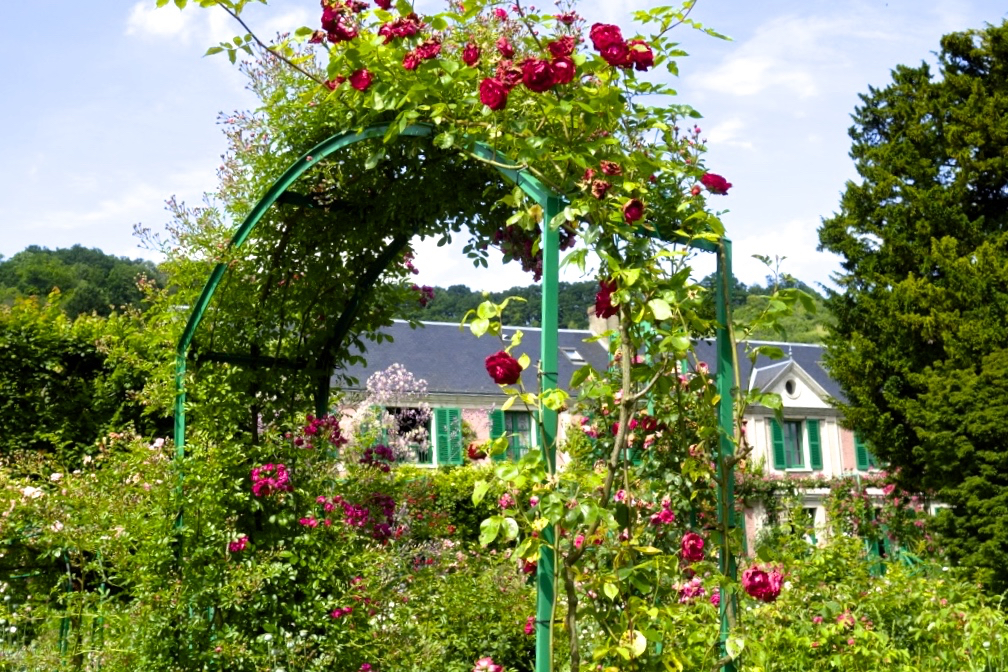 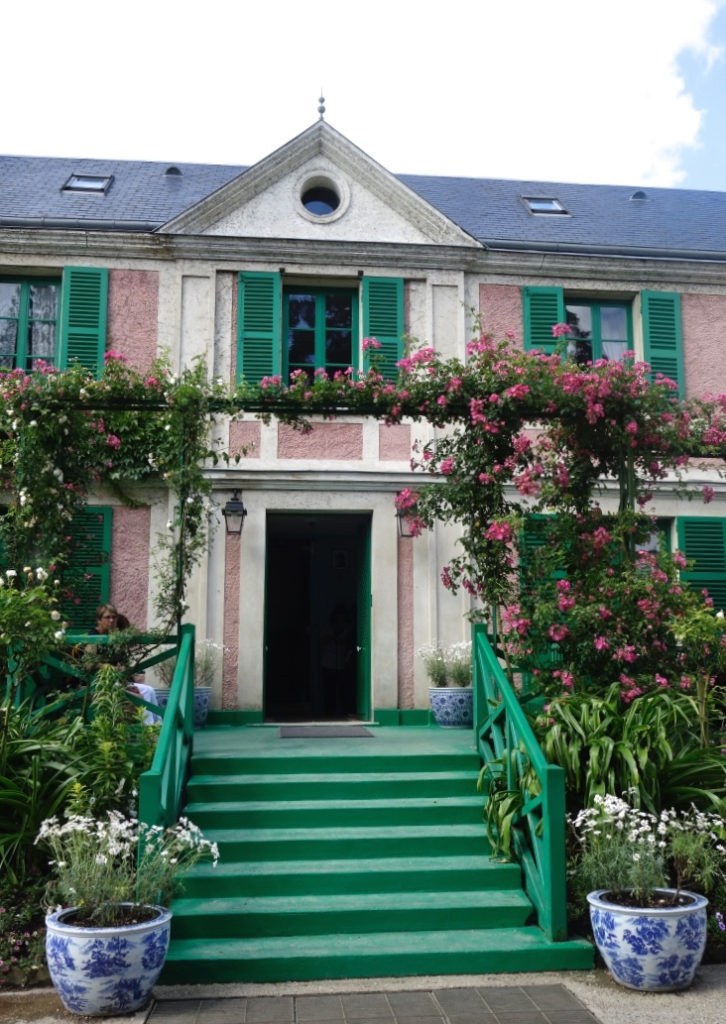 When visitors reluctantly leave the pond area, they wander past Monet’s glorious gardens to his home. 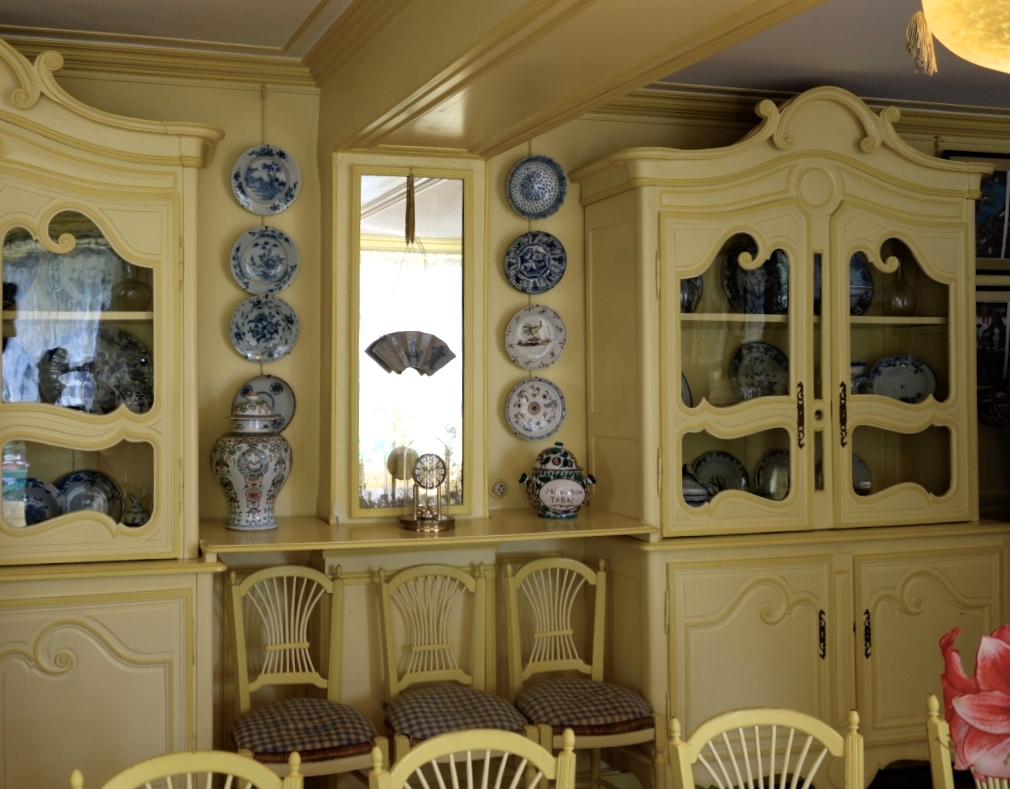 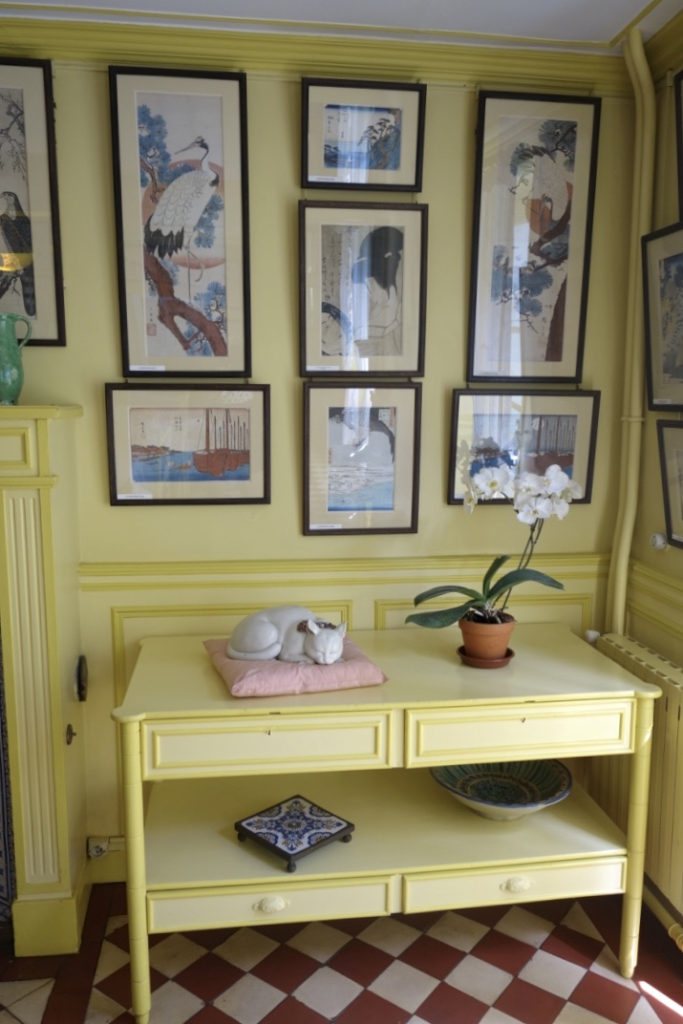 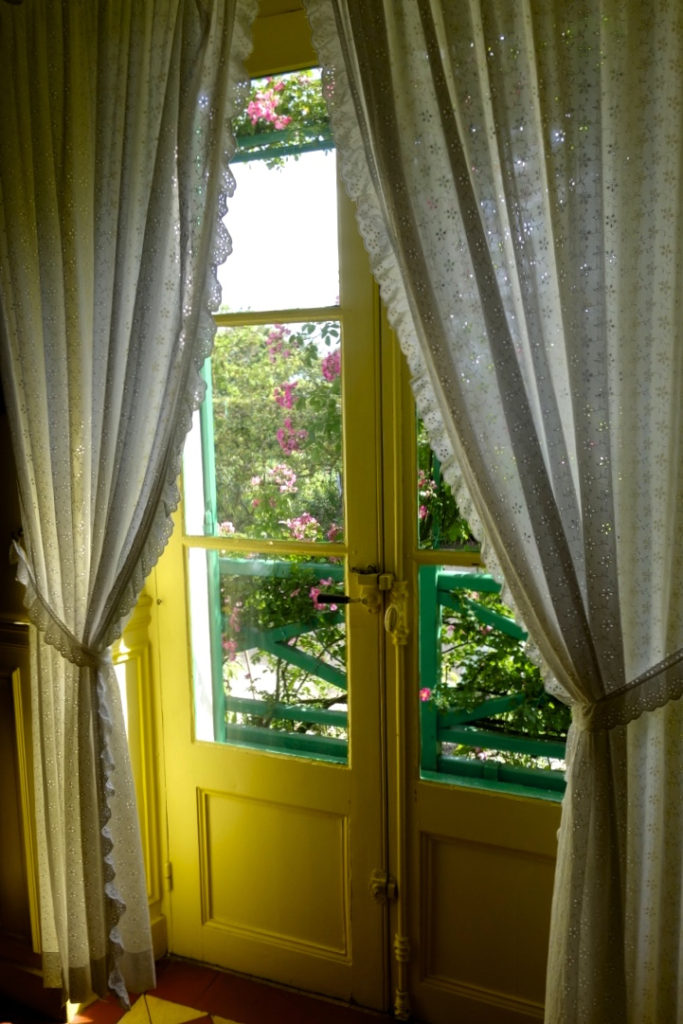 Once inside the house, visitors can wander about and see Monet’s bright and cheery yellow dining room. His collection of blue and white porcelain is displayed along with his Japanese prints. Sadly, the prints have lots much of their color after being displayed in the light for so long, but we can only imagine this room in Monet’s day, filled with color, good food, and lovely bottles of wine.

The blue and white theme continues in the kitchen with Delft tiles. Amazingly, we also get to see the artist’s gleaming collection of copper pots. 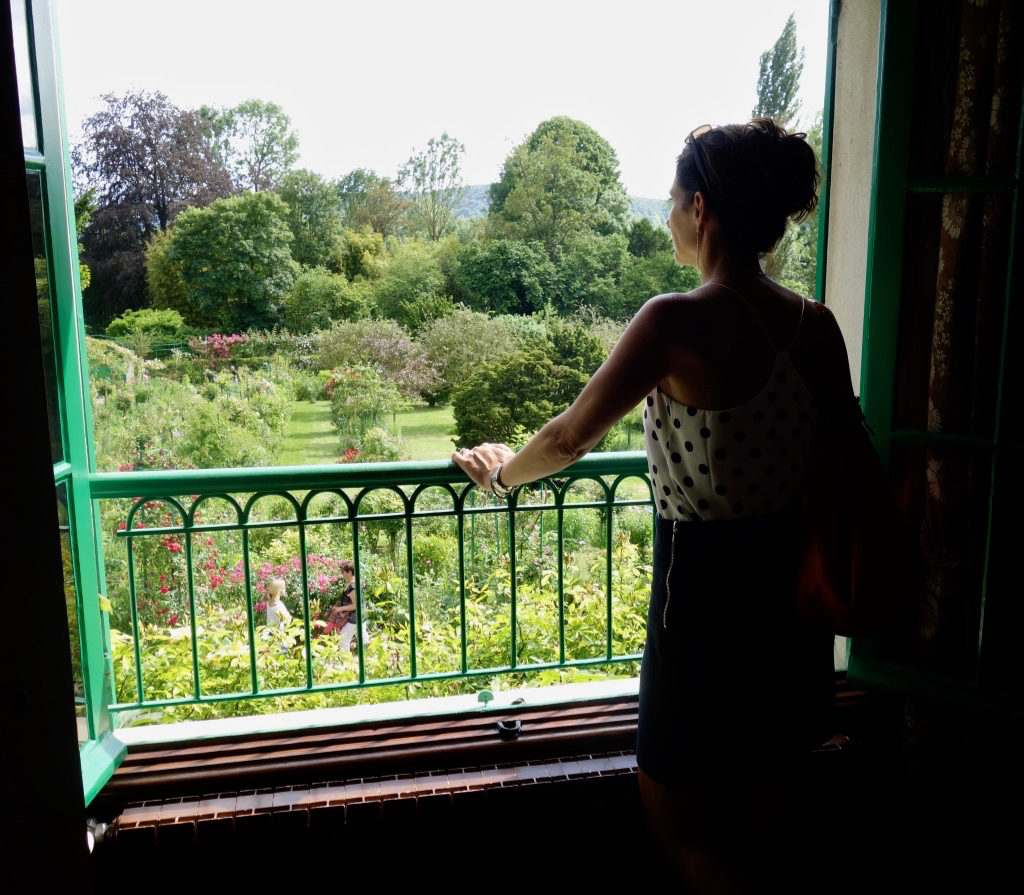 View out to the Gardens

Once upstairs, we discovered the windows flung open to the outdoors and I loved that I could gaze down to the magnificent gardens just as Monet must have done. 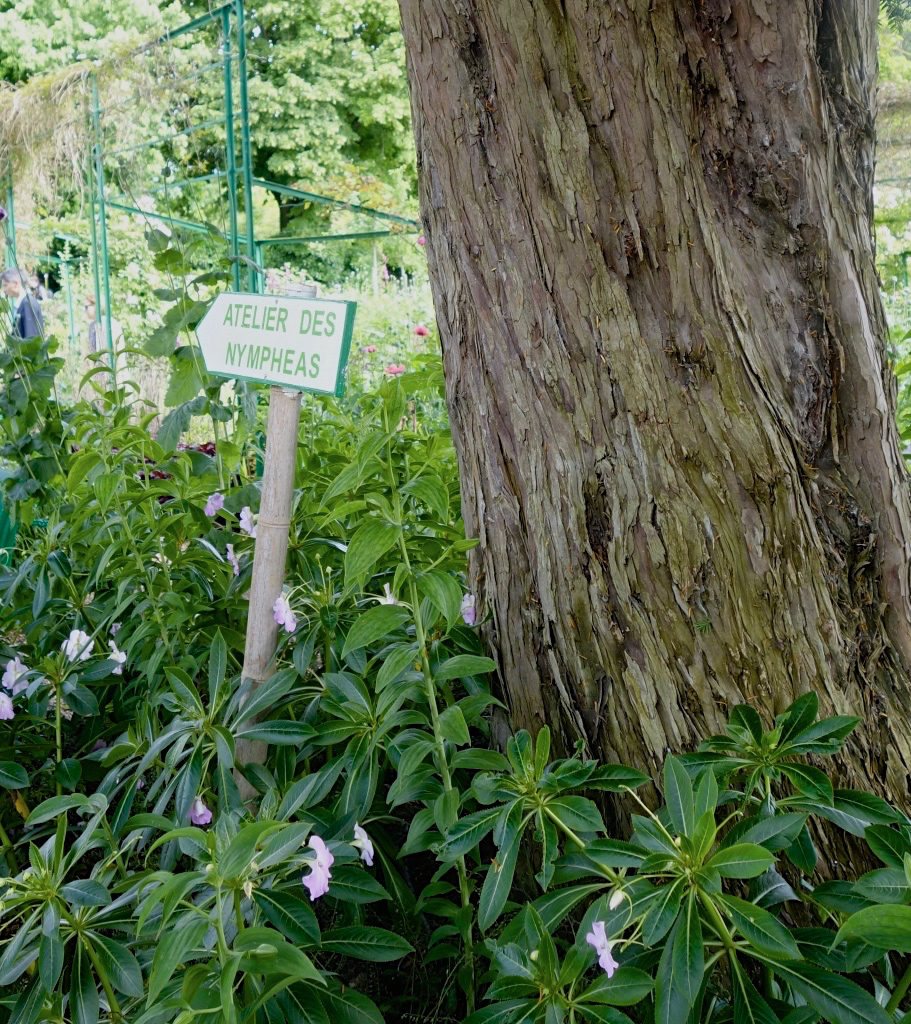 One disappointment is that the large studio Monet built to work on his massive water lily paintings has now been turned into a gift shop. I wonder what Monet would think of the variety and number of gift items his paintings inspired.

I imagine he would be quite amazed since he famously remarked, “My only virtue is to have painted directly in front of nature while trying to render the impressions made on me by the most fleeting effects.”